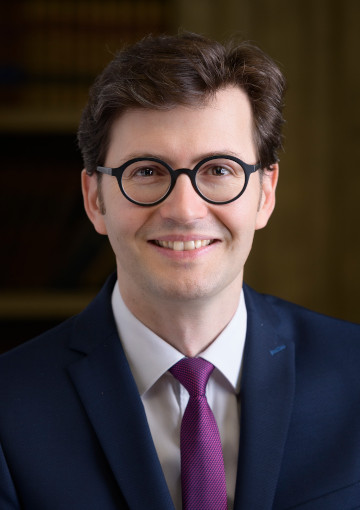 The cathedral’s Director of Music

With the various ensembles the entire range of church music ranging from plain chant to contemporary music is performed. The Director of music is responsible for choosing the music for High Mass at 10.15 a.m. every Sunday and the various religious feasts. Usually these services are broadcast live on Radio Klassik Stephansdom.

He conducts large scale works of the oratorio repertoire as well as new discoveries and premieres such as ‘The martyrdom of St. Stephen’ by Sir John Tavener, composed in 2015 for St. Stephen’s Cathedral in Vienna. Markus Landerer and the Cathedral choir and orchestra are regularly invited to perform in the Golden Concert Hall of the ‘Musikverein’ and various festivals.

Markus Landerer’s repertoire includes both large scale choral and orchestral music. He has developed a broad repertoire as an orchestra and choir conductor and has conducted a number of world premieres.
He has worked with the Rias Chamber Choir Berlin, the NDR Choir in Hamburg and the BR Choir in Munich.

As a specialist for sacred music, he is regularly invited to give master classes and lectures throughout Europe.

He received his academic training in church music, choral conducting and orchestral conducting at the music academies in Munich and Stuttgart (choral conducting with Michael Gläser, conducting with Per Borin, organ with Harald Feller). He joined master classes with Frieder Bernius, Eric Ericson, Peter Gülke, Johannes Kalitzke, Marco Letonja, Stefan Parkman and Hans-Christoph Rademann, among others.

As Director of Vienna Cathedral Music, Markus Landerer is also the curator of the 22 bells at Vienna’s St. Stephen’s Cathedral.